Hello!  This book is now ready to purchase and I have some in stock so you can order on https://www.worshipfulministries.com or if out of town, order straight from https://www.amazon.com\author\denisecookgodfrey.  Please read the Prologue below for my newest Book Release entitled “Unequally Yoked-The Pleasures of Sin lasts for a Season”, and let me know your thoughts by leaving a comment!  You may order an autographed copy by selecting “buy now” on side of the screen.  Blessings to you!

It was the middle of June and seemingly the perfect weather and season for a wedding.  Hot, yet, somewhat breezy with the smell of fresh flowers and fresh mowed lawns.  Everyone was filled with excitement as people from all walks of life flooded the small country church in great anticipation for what was soon to take place.  It was Christine’s wedding day.  After waiting so long and after much debate, she was finally marrying one of the most eligible Christian bachelors that a woman could marry.  Well liked in the small community the couple lived in, Aldridge, was a genuine man of God.

He came from a long line of preacher men, as Christine’s grandmother called them.

“Hold that preacher. Grab him and don’t let go of him.”  Christine could hear those words that Grandma Ruth used to recite.

Also, some of the older mothers of her home church would practically idolize the preacher.  These women had some sort of notion that if you went out of your way to accommodate a preacher, then you had special favor with God.  Now Christine was about to marry one, so you can imagine how all the older women felt.

“Marry that preacher man, and you set yourself up for life. Don’t ever let him go.” Ah, yeah! If Grandma Ruth were alive today, she’d cut her a step across the church for sure today.

Christine, with her marred past, had managed to get her life together, or so it seemed.  Christine still endured emotional struggles.  For one, the residue dangling from her past before meeting Aldridge.  Her appetite for acceptance and identity flawed her ability to choose wisely in the arena of finances and men.  She held onto low self-esteem, even though she was one of the most beautiful young women in the church.  She had a difficult time accepting gifts and encouragement. She didn’t have a connection with her family, and most of all, didn’t seem to find real satisfaction in her ministry work for the church.  The more she worked, the more down and out she’d become.

Christine suffered from depression. At times she’d cover up her pain by involving herself in relationships with men who were not right for her; even after meeting Aldridge.  After all, by her not having that special bond with her father growing up, she didn’t know how to distinguish love from sex and had a serious identity problem.  In her past, Christine seemed to connect with the bad boys and not the nerdy guys who attended church.  The ones who were not so nerdy were already taken, or flirted so badly with the women until it became a complete turn off for Christine.  Christine remembered having an affair with a married man during her early twenties before she’d gotten saved, and it ended up in total disaster. She vowed never to involve herself with married men again.

And then she met Aldridge. He was not the type of man that she normally fell for, but for some reason, she did.  The two seemed to hit it off soon after Christine had broken up with one of her flings. She was getting more acquainted with God at this time of her life and becoming more serious about her faith.  Aldridge, of course, was a big help to her in this area.  He had his own hidden baggage and had no idea how to communicate his struggles to Christine. He busied himself with playing the Knight in Shining Armor for Christine.

As time went on, Christine developed a passion for the things of God.  She was fine spiritually, but emotionally she was troubled.  This goes to show that there are many in the church world today who mask their pain. And even though they have truly given their life to Christ, without healing and deliverance in certain areas, they still live poor quality Christian lives.  This is dangerous, because the devil knows how to push certain buttons and attempts to destroy our fellowship with our Heavenly Father.

When we open ourselves up to sexual sin at a young age, do we also open a Pandora’s Box filled with pain and emotional baggage that could have an adverse effect on our adult life?
This Novella is a compelling story of influence, choices, consequences, and the offer of redemption that some receive and others reject.

*The book also provides a separate bible study guide that can be used for individual or group studies. Quote provided by best-selling Author Michelle Stimpson.

PRE-ORDER YOUR COPY TODAY via FaceBook at https://www.facebook.com/unequallyyokedcookgodfrey/# or by submitting an email to dcookgodfrey@gmail.com 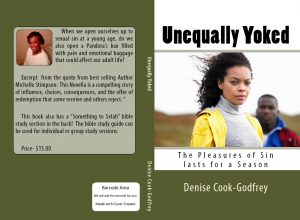